This research creates and implements a long-term herpetofauna (amphibian and reptile) survey protocol using plywood coverboards to determine the impacts of microgeographic features and changing seasonal climate variables on the phenology of  terrestrial amphibians and reptiles in San Francisco North Bay Area protected areas. Methods applying citizen science monitoring efforts by volunteer community members and students using a biodiversity smartphone application, iNaturalist is incorporated. Herpetofauna data has been collected since February 2014 and will continue to be collected to establish baseline data. The iNaturalist Herpetofauna Project includes more than 1,549 observations including a new distribution record for Black Salamander (Aneides flavipunctatus).

A series of large wildfires swept through northern California in October 2017, burning over 245,000 acres. The Tubbs Fire, which grew to become the most destructive wildlife in the history of California at the time, burned large swaths of parts of these research sites in the Mayacamas Mountains at Pepperwood Preserve and elsewhere. Investigation on the impacts of fire and other environmental variables on the herpetofauna continue. 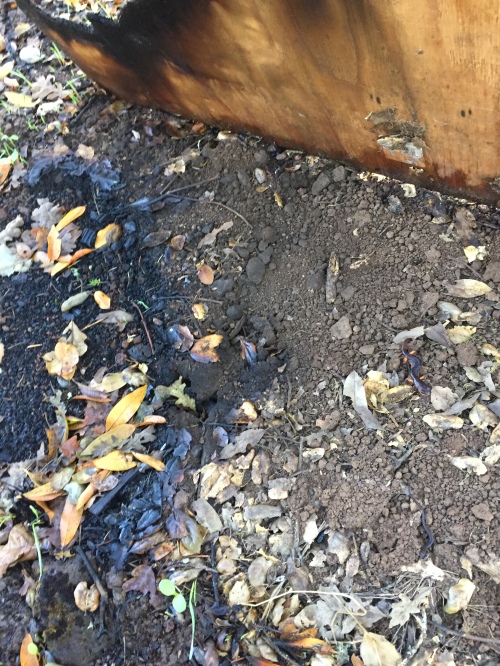 Amphibians taking refuge underneath a coverboard in the forest post fire. Can you find the Ensatina and the California Slender Salamander?

Southern Alligator Lizard adjacent to (presumably) its own burned shedded shin. First survey (Nov. 14, 2017) post fire. This is the most extreme evidence of impact to herpetofauna from the fire.

Turtle Pond, Pepperwood Preserve in Mayacamas Mountains burned everywhere but not the pond edge unlike the other pond site within the preserve. Future stats will determine if the lack of fire around the Turtle Pond edge provided a refuge for herps. 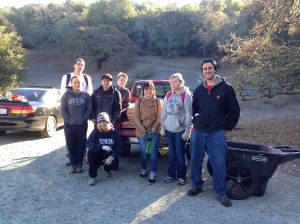 Powered by coffee, apple crumb and blueberry muffins, the Sonoma State University Biology Club gets ready for a good workout in the name of science (December 2013).

Distributing 108 – 1/2-inch thick 2’X4′ plywood coverboards at two different sites within Fairfield Osborn Preserve on Sonoma Mountain is not a job for wimps.

Realizing the wheel chart is useless on the steep and narrow trails, the coverboards are hauled up on our back, on our head, or however possible. 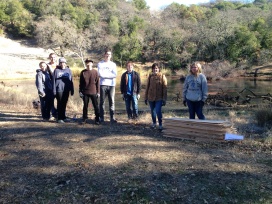 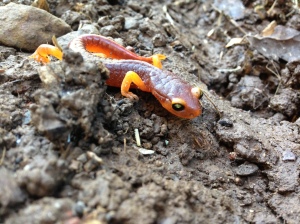 An undergraduate researcher participating in this project finds an Ensatina near the Fairfield Osborn Preserve Education Center.

A rodent runs from underneath a pile of coverboards stored at Pepperwood Preserve’s Turtle Pond parking area. 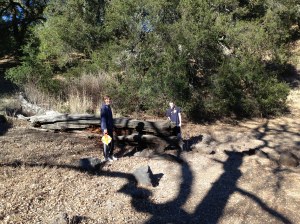 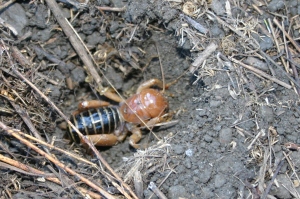 Just a friendly Jerusalem Cricket under an ancient coverboard at Double Ponds, Pepperwood Preserve. Not only are they not true crickets, they are not native to Jerusalem. These nocturnal insects feed primarily on dead organic matter but can also eat other insects.

Dr Derek Girman, SSU Biology Club members and other SSU undergraduate students power through cold rain and wind in the middle of a terrible drought. Not everyone was lucky enough to remember their snow goggles.
Feb. 2, 2014. 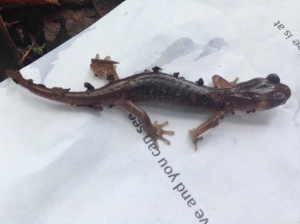 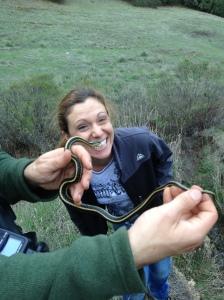 2 responses to “About the Research”